The Floodplain Management Plan for the Border Rivers Valley Floodplain 2020 (plan) commenced on 11 September 2020 and includes management zones, rules and assessment criteria for granting or amending approvals for flood works within the plan area. 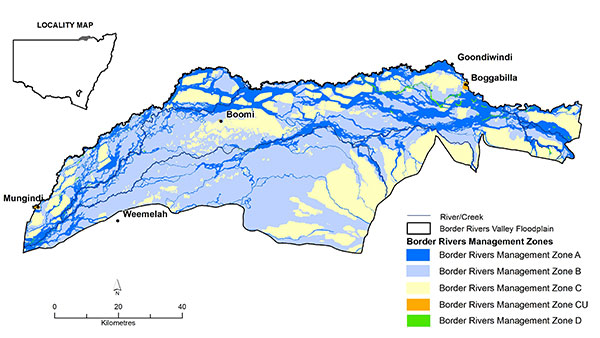 The Floodplain Management Plan for the Border Rivers Valley Floodplain 2020 PDF, 5767.15 KB is a detailed legal instrument written in the required statutory framework.

A transitional provision has been included in the Floodplain Management Plan for the Border Rivers Valley Floodplain 2020. This provision mitigates any disadvantage applicants may face as a result of significant delays in the assessment of the flood work applications while ensuring that a comprehensive of assessment criteria is applied to the application. The latter providing for the long-term protection of the floodplain, environmental assets, cultural values and flood flow paths. More information about this transitional provision is available in a fact sheet PDF, 108.03 KB.

The department road tested the major concepts of the plan with key stakeholders during a targeted (informal) consultation process over the period Wednesday, 3 August 2016 to Wednesday, 14 September 2016. Stakeholders from a range of industry groups—including landholders, Aboriginal communities, environmental interests, consultants and government—were invited to attend workshops in Goondiwindi and Mungindi. These workshops introduced attendees to the main elements of the draft plan, including the boundary, management zones, and the rules for granting or amending flood work approvals.

Community input into the preparation of the plan was invited during public exhibition over the period Friday 15 December 2017 to Friday 9 March 2018. The department invited input via a media release, the Have Your Say portal, newspaper advertisements and notification letters to key stakeholders and landholders whose properties within Management Zones A and D within the plan area. The department also hosted individual appointments with interested stakeholders to provide greater detail about how the rules and assessment criteria would be applied in each management zone. Appointments were hosted in Boggabilla, Goondiwindi, Boomi and Mungindi in February and March 2018.

Back to top
Page link: https://www.industry.nsw.gov.au/water/plans-programs/plans/valleys/border-rivers