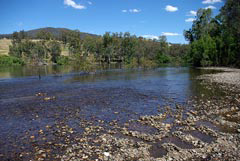 The Upper Murray is a rugged and mountainous catchment that supports vast areas of wilderness and important alpine habitats. It comprises of the headwaters and unregulated rivers that supply the inflows to the Hume Dam, the main storage on the Murray River.

The Upper Murray catchment is located in southern New South Wales (NSW) along the NSW-Victoria border. It borders the upper reaches of the Murrumbidgee catchment to the north. The Murray River begins its course among the high mountain peaks of Mount Kosciusko and Mount Jagungal in the Snowy Mountains, and marks the border between NSW and Victoria through to the Hume Dam.

The Upper Murray catchment supports a sparse population with around 40% living in NSW. Tumbarumba and Khancoban are the largest towns in the NSW portion of the catchment.

The Murray River flows from the Snowy Mountains, along the NSW-Victoria border and through south-eastern South Australia to Lake Alexandrina where it meets the Southern Ocean. The Upper Murray River covers less than 1.5% of the area of the Murray-Darling Basin, but contributes 37% of total inflow to the Murray River in an average year.

Major NSW tributaries to the Upper Murray include the Geehi, Swampy Plains and Tooma Rivers and Tumbarumba Creek. The major Victorian tributary is the Mitta Mitta River which enters Hume Dam near Tallangatta.

View real-time data from the Upper Murray catchment on this website.

The Hume Dam at 3,038,000 megalitres, is the main operational storage for the Murray River. It has been supplying regulated water to the Murray River system since its completion in 1936.

Dartmouth Dam at 3,906,000 megalitres, on the Mitta Mitta River in Victoria, is the largest storage in the catchment. It is operated in conjunction with Hume Dam to supply water users along the Murray River.

Three smaller storages – Khancoban Pondage, Geehi Reservoir and Tooma Reservoir – are located in the upper reaches of the catchment. They receive transfers of water from the Snowy Mountains Scheme for release to the Murray and Murrumbidgee valleys.

Over 60% of the Upper Murray catchment is used for forestry or conservation. The next most extensive land use is grazing. Major water users within the catchment include Snowy Hydro Ltd, local councils and water utilities, and sheep and cattle graziers. However, water from the catchment supplies major irrigation industries along the Murrumbidgee and Murray to South Australia, as well as to all the towns located on the river, including Adelaide.

Water resources of the Murray River are shared between NSW, Victoria and South Australia as part of the interstate River Murray Waters Agreement administered by the Murray-Darling Basin Authority. Sharing water resources fairly between the states, particularly during drought, is a key water management issue.

The Upper Murray catchment receives transfers of water from the Snowy Mountains Scheme via Geehi Reservoir and Khancoban Pondage while water from Tooma Reservoir is transferred out of the catchment to the Tumut River.

Most rivers and creeks in the Upper Murray catchment are unregulated and water users rely on natural flows or small structures, such as weirs for their water supplies. River flows are variable and during drought conditions natural river flows may cease, reducing the amount of water available to be shared between competing users.

Kosciuszko National Park is the largest conservation area in the Upper Murray catchment covering around a quarter of the NSW portion. It is recognised nationally and internationally as a UNESCO Biosphere Reserve and preserves extensive areas of wilderness. The alpine wetlands within the park are of national and international importance. Blue Lake is listed under the Ramsar Convention and all of the alpine fens, bogs and lakes within the park are listed in the Directory of Important Wetlands in Australia.

To preserve water resources in river and groundwater systems for the long term it is critical to balance the competing needs of the environment and water users. Water sharing plans establish rules for sharing water between the environmental needs of the river or aquifer and water users, and also between different types of water use such as town supply, rural domestic supply, stock watering, industry and irrigation.

Under the Water Management Act 2000 all water sharing plans are required to have performance indicators to assess whether the plans have been effective in meeting their objectives. The Environmental flow response and socio-economic monitoring. Murray Valley and Lower Darling River - progress report 2011 (PDF, 7004.7 KB) summarises activities undertaken in the previous water year and provides an interim assessment of outcomes from the investigations.

Back to top
Page link: https://www.industry.nsw.gov.au/water/basins-catchments/snapshots/upper-murray