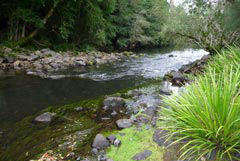 The Hunter catchment supports a diversity of landscapes, from high mountain ranges to broad fertile floodplains and extensive estuarine areas. In the west of the catchment there are large areas of wilderness and national park.

The Hunter catchment is east of the Great Dividing Range around 100 kilometres north of Sydney. It is bound by the Manning and Karuah catchments in the north, and by the Lake Macquarie and Hawkesbury-Nepean catchments in the south. It comprises the region popularly known as the Hunter Valley.

The Hunter is the largest coastal catchment in NSW, with an area of about 21,500 square kilometres. Elevations across the catchment vary from over 1,500 metres in the high mountain ranges north of the catchment, to less than 50 metres on the floodplains of the lower valley.

Newcastle, the second largest city in NSW, is located at the mouth of the Hunter River. Major towns in the catchment are Maitland, Singleton, Cessnock, Muswellbrook and Raymond Terrace.

The Hunter River begins in the Mount Royal Range on the western side of the Barrington Tops. It flows for around 460 kilometres from there, to enter the sea at Newcastle. Tributaries of the upper Hunter River include the Pages and Isis Rivers, and Middle, Dart, Stewart, Moonan and Ormadale Brooks.

The Paterson and Williams Rivers rise in the Barrington Tops and drain the higher rainfall area, north-east of the catchment, with both rivers flowing south into the Hunter estuary.

The southern side of the Hunter is drained by a number of streams, the largest being Wollombi Brook, which rises in the Hunter Range at an elevation of about 440 metres and enters the Hunter River near Singleton.

The Hunter is regulated by two major headwater storages, as well as a number of minor dams. Glenbawn Dam on the upper Hunter River, and Glennies Creek Dam on Glennies Creek are operated to supply water for irrigation, town water, stock and domestic supplies, as far downstream as Maitland. The volume and pattern of flows in the Hunter River system have been significantly altered by the construction and operation of these storages. Lostock Dam is a smaller storage that provides a regulated water supply to users along the Paterson River. Chichester Dam in the upper Williams catchment, and Grahamstown Dam near Raymond Terrace are operated to supply town water to the lower Hunter region.

The Hunter River supports a large population and a diverse range of important water users. Water users include Hunter Water Corporation, which supplies the City of Newcastle; local councils; power generators, which provide most of the electricity used in NSW; major coal mines, that make Newcastle the largest coal exporting port in the world; other heavy industry; horse and cattle studs; and irrigated agriculture, such as the world renowned Hunter Valley wineries and dairy farms.

The volume and pattern of flows in the Hunter River system have been significantly altered by the construction and operation of Glenbawn and Glennies Creek dams. Large volumes of water are also taken and stored for power station use in Lake Liddell. Water sharing plans have been developed to address environmental requirements downstream of the major dams, and to ensure sustainable use of water by all water users.

The Hunter's climate is highly variable, with periods of severe drought and flood. There has been extensive modification of the lower Hunter River's floodplain, in particular extensive construction of flood diversion works following the major floods of the 1950s and 1970s.

The Hunter region, and particularly the lower Hunter catchment, supports a high level of urban and industrial development which has affected water quality. In the upper catchment significant land clearing has resulted in erosion and salinity problems.

Several large wetland complexes are listed as nationally or internationally important for their waterbird habitat. These are the Kooragang Nature Reserve (now part of Hunter Wetlands National Park), Hexham Swamp, the upland swamps of Barrington Tops, and the Shortland Wetlands Centre.

To preserve water resources in river and groundwater systems in the long term, it is critical to balance the competing needs of the environment and water users. Water sharing plans establish rules for sharing water between the environmental needs of the river or aquifer, and water users, and also between different types of water use such as town supply, rural domestic supply, stock watering, industry and irrigation.

Under the Water Management Act 2000 all water sharing plans are required to have performance indicators to assess whether the plans have been effective in meeting their objectives. The Environmental flow response and socio-economic monitoring Hunter Valley, Central and Lower North Coast - progress report 2010 (PDF, 6978.94 KB) summarises activities undertaken in the previous water year and provides an interim assessment of outcomes from the investigations.

Back to top
Page link: https://www.industry.nsw.gov.au/water/basins-catchments/snapshots/hunter