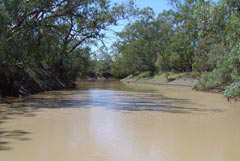 The Condamine-Culgoa catchment begins in Queensland as the Condamine River. Half way down the catchment, the river develops a broad distributary system of channels, including the Culgoa, Birrie, Bokhara and Narran, that carry water over a vast floodplain and across the border into NSW.

The Condamine-Culgoa catchment is in northern NSW and southern Queensland. The rivers of this system enter the Barwon River between Bourke and Brewarrina.

Major towns in Queensland include Toowoomba, Roma and St George. Lightning Ridge is the major town in the NSW portion of the catchment. Brewarrina is located on the Barwon River at the bottom of the catchment.

The Condamine River begins at Warwick in south-eastern Queensland, flowing in a north-westerly direction across the Darling Downs, before becoming the Balonne River near Surat. It is joined by the Maranoa River, a major tributary that drains a large area north of St George.

About 70 kilometres downstream of St George, the river splits into five channels – the Narran, Bokhara, Ballandool and Culgoa rivers, and Briarie Creek. After crossing the border into NSW, the Bokhara River splits again, forming the Birrie River that flows south-east, eventually joining the Culgoa. The Narran River terminates in a series of floodplain lakes, while the Bokhara and Culgoa flow into the Barwon-Darling River downstream of Brewarrina, during times of very high flow

View real-time data from the Condamine-Culgoa catchment on this website.

In Queensland, the Condamine-Culgoa River is regulated by Beardmore Dam (101,000 megalitres) on the Balonne River in Queensland. There are no major storages in the NSW catchment, leaving the streams in the NSW portion of the basin unregulated.

Grazing accounts for 95% of land use in the NSW catchment. Water is used mainly for irrigation, stock and domestic use, with some volumes of water for town water supply. The irrigation industries in the basin include major cotton growing areas.

Water users along unregulated creeks and streams do not always enjoy a reliable water supply due to the highly variable nature of flows in the basin.

To preserve water resources in river and groundwater systems for the long term, it is critical to balance the competing needs of the environment and water users. Water sharing plans establish rules for sharing water between the environmental needs of the river or aquifer, and water users, and also between different types of water use such as town supply, rural domestic supply, stock watering, industry and irrigation.

Back to top
Page link: https://www.industry.nsw.gov.au/water/basins-catchments/snapshots/condamine-culgoa