From 2017 until the rains in early 2020, northern inland New South Wales had been experiencing record drought conditions. As waterbodies dried and contracted, many impacts were felt. As water became scarce and rivers stopped flowing:

From late January through to the end of March 2020 widespread rain fell across parts of north-west New South Wales and southern Queensland. Parts of the northern Murray-Darling Basin received more than 200 mm of rain. This rainfall created significant inflows to the Border Rivers, Peel, Namoi, Gwydir and Macquarie valleys and along the Barwon-Darling River. Source: ©Commonwealth of Australia 2020, Bureau of Meteorology. Reproduced in accordance with the Creative Commons Attribution Australia Licence. The map has not been modified

Before these rains created flows, some major river systems had ceased to flow for extended periods. These river systems include the:

Rain created flows that recommenced and connected the Barwon-Darling River and the northern tributaries. By mid-April 2020 the Barwon-Darling was flowing along its full length from Mungindi, on the Queensland border, into the Menindee Lakes and downstream to Wentworth. Thousands of kilometres of rivers flowed for the first time in many months.

The map shows the cumulative volume of water that has flowed at selected gauges during the period from 1st January 2020 to 19th April 2020. Volumes are still to be confirmed for the end of the Namoi and Gwydir systems.

The first flows arrived at Menindee Lakes (Lake Wetherell) on 10th March. We expect flows to continue into Lake Wetherell over the coming months. Menindee Lakes should receive more than 500 gigalitres (GL) in total inflows.Releases from the Menindee system to re-start flows in the Lower Darling commenced on 26th March with an initial high pulse flow. A lower base flow is following the first pulse flow. This will maintain supply to Lower Darling landholders for the next 12-18 months. The release pattern was designed to manage water quality and the impacts on remaining fish populations. Flows along the Lower Darling reached the Murray River in mid-April 2020.

The New South Wales Government has committed to assessing the outcomes of meeting critical human and environmental water needs from its management of the flow event. A range of interim criteria supported our decisions to restrict water access. Limiting access protected critical needs for people and the environment.

The rainfall created significant inflows in the Border Rivers, Peel, Namoi, Gwydir and Macquarie valleys. The rain fell, in the most part, below the major storages. Pumping access had to be actively managed to protect the flows as they travelled downstream.

Under normal conditions, water sharing plans set the rules for water extraction. However, during extreme events, such as drought, additional restrictions can be applied. DPIE Water temporarily restricted most commercial pumping access to river flows and overland flows in these areas. This allowed the replenishment of town supplies and fish refuge pools downstream. It also allowed the reconnection of the northern Basin river systems to the Barwon-Darling and the Lower Darling. For more information on how the temporary water restrictions were applied, see our series of fact sheets.

Many critical human and environmental benefits from the recent rain and subsequent flows can be seen almost immediately. Others take longer to take effect. Studies are being carried out to assess the benefits of the flows. Updates will be provided as ecological studies are completed.

Monitoring helps us to find out what impact the recent rain and surface water flows have had on groundwater levels. The data has been reviewed for 20 groundwater sources so far. Early results confirm that shallow systems, such as the Peel Alluvium, show a clear but relatively minor response to the rains and flows. That is, that only a small volume of this rain has reached the groundwater system.

Larger, deeper systems show some recovery in water level. Studies will be completed to establish if this is due to a reduction in groundwater pumping or refill due to rain.

Soil profiles are very dry as a result of the prolonged drought. More rain and flood events are needed for significant groundwater recharge to occur. Continued monitoring will determine the long term impacts of the recent rain events confirming whether this is delayed recharge or water levels responding to pumping behaviour.

Rain may cause short term water quality problems following drought or bushfire. Sediment, ash and debris washed into waterways can cause rapid drops in oxygen levels and smother habitats. Continuing flows are needed to flush the system, transporting and diluting material, which leads to improved longer term water quality.

Similarly, catchments in the northern Basin have shown improvements in water quality. Initial data shows that salinity levels along the Barwon-Darling have improved. For example, salinity dropped from 650 mS/cm at Bourke in early February 2020 to 150 mS/cm in late February 2020. The flows also disrupted stratification and resulted in increased dissolved oxygen levels throughout the water column following the initial flows. Flows also dispersed a number of algal blooms that were present in the system.

Flows improve the connection of the river system so that deep pools are linked together. The Barwon-Darling River is again connected with its tributaries. Fish and other aquatic animals can move up and down significant lengths of the rivers. Iconic species like Murray Cod, Golden Perch and Silver Perch breed and disperse during these connecting flows. Flows like this help maintain healthy fish populations throughout the Basin. View more information about fish and flows.

Researchers from the Department of Primary Industries (Fisheries) monitored fish populations and fish movement during the flow event. Monitoring will continue over the next year. Preliminary results indicate that Golden Perch had numerous breeding events because of these flows. Larvae and juveniles were found in the flowing waters from the Moonie River down the Barwon-Darling River and in Lake Wetherell (Figure 1). Finding Golden Perch juveniles and larvae at the Menindee Lakes is of great significance because the lakes are an important nursery for Golden Perch. It is known that fish that grow up in this nursery then move throughout the northern and southern Basin in later years.

During the drought, water mixers were placed in ten large weir and refuge pools in the river at Menindee and in the Lower Darling River. These mixers protected some fish so that the population could recover when the river began to flow again. The mixers are no longer required as the water quality has improved because of these flows. View more information about the native fish drought response. 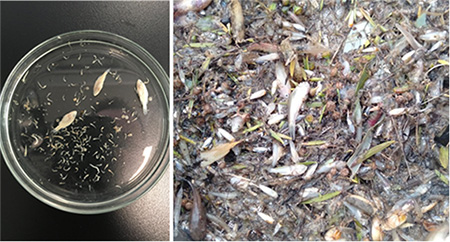 Rainfall and flow events improve the health of the environment. Critical wetlands and riparian habitat wet or fill with water. During times of drought animals and vegetation can be sustained. Such events also help to start recovery from drought.

Satellite imagery (Sentinel 2) has been used to monitor flows. Inundation maps of the Gwydir Wetlands and Macquarie Marshes are being made for the rainfall events of early 2020. Initial mapping shows that areas of the Macquarie Marshes received some flows from mid-February. Our Macquarie Marshes Fact Sheet has more information. By the end of April, more than 2600 ha of the critical Northern Reedbed was inundated.

Within the Gwydir Wetlands, preliminary results show that flows began to reach the core reeds by the end of January. This continued to extend during February and early March 2020. Within the Central Gingham Water Management Area, more than 1700 ha of semi-permanent wetlands (Common Reed, Cumbungi, Water Couch) were inundated. In the Lower Gwydir, more than 1800 ha of semi-permanent wetland was inundated as a result.

Back to top
Page link: https://www.industry.nsw.gov.au/water/allocations-availability/droughts-floods/drought-update/managing-drought-recovery/north-west-flows-in-early-2020