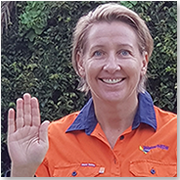 When Alex started her engineering degree 30 years ago, women made up less than 10% of the engineering community. Three decades later, she is dismayed that this gender imbalance remains, with women making up just 12% of engineers.

’Women make up 51% of the Australian population and yet there is low representation of women in STEM across the board. And trades are the worst – just 1% are women. Yet trades are Australia’s second largest industry,’ laments Alex.

Alex is no stranger to being one of few women in the workplace. She started her career in the army at a time when there were no women in the Corp of Royal Australian Engineers. However, the inspirational women leaders around her gave her the encouragement and support to continue – particularly at challenging times.

’If I could say to myself “Look over there, someone else has done it”, I had the courage to dust myself off and keep going.’

To Alex, this year’s International Women’s Day theme of ‘Choose to Challenge’ means not only facing hard times and challenges but choosing to learn from them.

‘It’s about learning from every situation and choosing to pick yourself up and move forward. If you fail, it’s because you gave up. So, keep going!’

With the responsibility of overseeing major water infrastructure projects across NSW, Alex is now able to inspire others. She acts as a mentor, encouraging diversity in the teams she leads and ensuring women’s successes are showcased.

‘Whether we’re leaders or not, we all need to keep driving to do better in everything. Better in diversity. Better in the outcomes we deliver. Better in being in control of our destiny.’

This year, Alex is taking control of her destiny in an entirely new way – setting her sights on becoming a surf life saver!

Back to top
Page link: https://www.industry.nsw.gov.au/natural-resources-access-regulator/about-nrar/who-we-are/women-in-water/alex-fisher2