The NSW Government has announced $1 million for improvements to the Warden Head Lighthouse in Ulladulla.

Member for the South Coast Shelley Hancock said the funding would provide safety and other improvements to the popular Crown land reserve.

“The funding is for the installation of safety fencing and other improvements to the reserve supporting Shoalhaven City Council's plans for the site.

“I acknowledge the community who have long advocated for an aesthetic and safety upgrade to the reserve.

“This million-dollar upgrade ensures residents and tourists can continue to enjoy the million-dollar views from the Warden Head Lighthouse and supporting its ongoing role as a South Coast icon.”

Warden Head Lighthouse, which has operated since the late 1800s, remains an active lighthouse on the Ulladulla headland and its reserve a popular scenic location for spotting whales and other aquatic life.

$300,000 will be provided this financial year under the stimulus program for upgrade work at the reserve and another $700,000 next financial year.

Upgrades to the reserve will complement recent refurbishment of the lighthouse and link to the recently installed shared pathway along Deering Street, Ulladulla.

Minister for Water, Property and Housing Melinda Pavey said the COVID-19 stimulus program was upgrading important community infrastructure while supporting the heritage of the area.

“Designed by the Colonial Architect's Office, Warden Head lighthouse is one of only two lighthouses in NSW made from wrought iron plates, the other being in Wollongong, making it an incredibly rare sight,” Minister Pavey said. 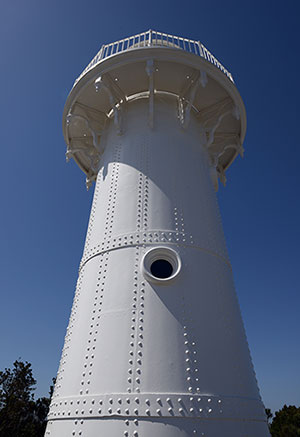 Back to top
Page link: https://www.industry.nsw.gov.au/media/releases/2020-media-releases/$1-million-for-warden-head-lighthouse-reserve-at-ulladulla