Two NSW Crown Land managers have been recognised for their hard work on behalf of their communities at the 2019 NSW/ACT Regional Achievement and Community Awards.

About 250 guests from across NSW and the ACT attended a ceremony at the Fairmont Resort & Spa in the Blue Mountains on 9 November where awards were presented across eight categories.

The aim of the Regional Achievement and Community Awards are to encourage, acknowledge and pay tribute to individuals, communities, businesses and groups who are making a significant contribution to regional and rural areas.

Arthur Hatch, who is on the Mullumbimby Showground board, won the Department of Planning, Industry and Environment Individual Excellence in Crown Land Management Award from a strong field of candidates.

Mr Hatch has been instrumental in turning the Mullumbimby Showground Reserve into a flourishing community jewel.

Serving first as Treasurer and now as Chair of the board, Mr Hatch’s stewardship has helped turn around the showground’s finances from a position of debt to a surplus of over $300,000. Half of the showground’s income is now being generated by its camping services.

The Trust has dramatically changed the future of the Showground Reserve, which is on a 60-acre site along the Lachlan River and is used by the Cowra Jockey Club, Cowra Harness Racing Club, Cowra Show Society, Cowra Pony Club and Cowra Campdraft Club.

The Trust has renovated and refurbished the heritage-listed turnstile gates at the showground, upgraded the camping area and increased its capacity. It has provided a covered meeting place, restored the 1940’s stable block and derelict Caretaker’s Cottage and employed an onsite caretaker.

The improvements have attracted more users to the showground and increased participation in major events.

Winners of the awards each received either $2,000 from Awards Australia or air time packages on PRIME7 and a trophy. 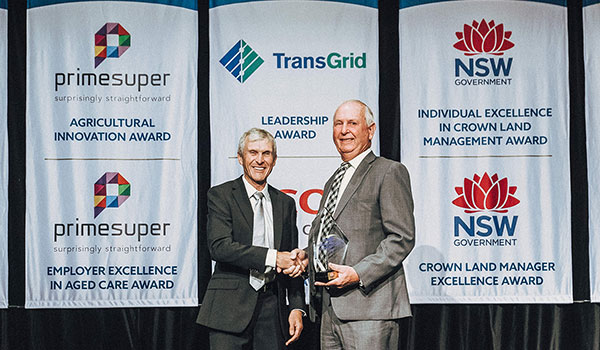 Back to top
Page link: https://www.industry.nsw.gov.au/media/releases/2019/crown-land-managers-win-at-2019-regional-achievement-and-community-awards