Hunter companies in demand in Vietnam

Industry group HunterNet, a network of 150 companies in the Hunter region, has signed a Memorandum of Understanding (MoU) with Vietnamese conglomerate T&T Group in Hanoi, further cementing the close links between Hunter businesses and the fast-growing Vietnamese economy.

Minister for Trade and Industry Niall Blair witnessed the HunterNet MoU signing and said HunterNet is a great example of how to pursue the enormous opportunities in the Association of South East Asian Nations (ASEAN).

“The great success of HunterNet in building business activity in Vietnam is testament to years of ground work in the region. This builds on the successful ASEAN-Australia Special Summit in Sydney earlier in the year and demonstrates that there can be huge payoffs for those that put energy into growing international markets,” Mr Blair said.

“HunterNet have proved themselves as the ‘eyes and ears’ on the ground for Hunter businesses and the conduit to export success. They have showed that being located in regional NSW is no barrier to building international business success.

“The runs on the board for HunterNet in Vietnam are impressive, from processing plants to renewable energy projects. On the flip side, their work demonstrates that there’s a lot of Vietnamese companies interested in investing in NSW.”

“What we’ve found this week is that there’s real trust in NSW and Australia. There is trust in our expertise in the areas Hunter businesses thrive in, such as agribusiness, energy and resources, defence, and infrastructure,” Mr Cade said.

“Vietnam is one of the strongest of the fast growing ASEAN economies and is a low-cost country in terms of doing business. We are talking about 100 million people with large demands for food security and energy, along with a burgeoning middle class.

Parliamentary Secretary for the Hunter Scot MacDonald MLC said he was pleased to see HunterNet secure further international collaboration, following the MoU signed in March between HunterNet and the Vietnamese Government.

“The latest MoU highlights the growing Defence industry in and around RAAF Williamtown, highlighting the growing importance of the Defence and aerospace industry to the Hunter,” Mr MacDonald said.

HunterNet was founded 26 years ago to focus on bringing local businesses more opportunity. In the past six years, it internationalised its approach and has dramatically increased its focus on exports.

NSW merchandise exports to Vietnam are worth nearly $985 million, increasing over 25 per cent in the last five years. 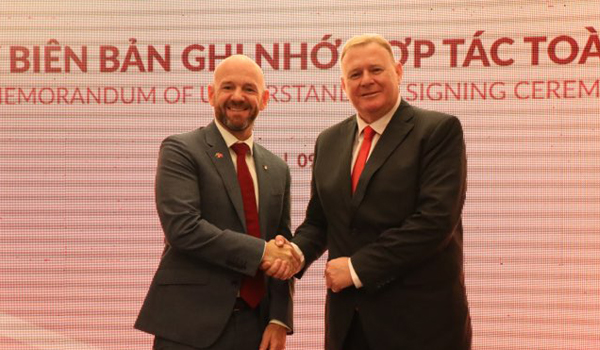 Back to top
Page link: https://www.industry.nsw.gov.au/media/releases/2018/hunter-companies-in-demand-in-vietnam