The NSW Government is seeking community views on a proposal to demolish the former Saltwater Café at 59 Lamont Street Bermagui and restore the site as open space. 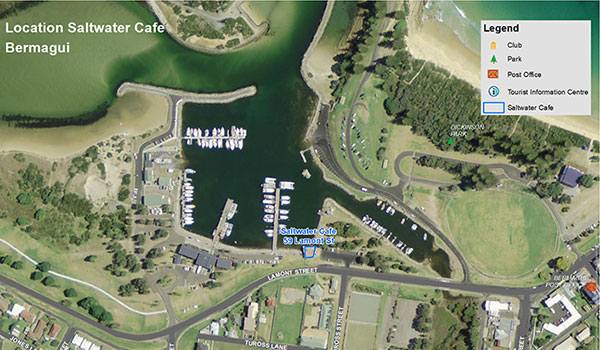 The site is Crown land that was held until 2018 for commercial use. However, the building has been vacant since the lease was abandoned in 2017.

When the lease expired, the department commissioned a structural engineering report on the 60-year-old building, which indicated the building has reached the end of its functional life.

The report notes extensive damage, rotting and corrosion. Of particular concern is that much of the building is over water, supported on concrete piers that have eroded in some parts to 40% of their original width. Additionally, it’s likely that the building contains asbestos that, while currently stable, must be safely removed.

While no decision has been finalised, the department recommends the building be removed to protect public safety and open up views of Bermagui Harbour.

A 28 day public submission period commenced Friday 22 November 2019 and ended at midnight on Thursday 19 December 2019 (AEDT). During this period, submissions were accepted via online form and by post.

The submission period for this proposal closed at midnight Thursday 19 December 2019 (AEDT).

Important: note that all submissions will be published on the department’s website unless marked as confidential.

Download the structural engineer's report about the Saltwater Café building.

Why are you proposing to demolish the building?

Public safety is a priority. The department considered the report (see above) commissioned at the end of commercial leasehold of the building, which has indicated the building is not safe. Of particular concern is that:

Shouldn't barriers be erected around the building for safety?

The structural engineer’s report pointed to serious issues, but not immediate threats to public safety. For example, the site’s probable asbestos is currently in bonded, relatively stable condition. However, as the building deteriorates this situation may change, which is why we are acting now to seek community views on the proposed removal of the building.

Why don't you just repair the building?

We believe investing significant sums in repairs isn’t a good use of public funds, given the lack of real commercial interest in the café building.

We’re aware that the Saltwater Café business changed hands several times in the lead up to 2017, when the business ceased operations. The building has been empty since then.

With the structural engineer’s report indicating that the cost of making the building safe is around $300,000 (before improvements or commercial fit-out), there appears to be little potential for a return on investment.

Therefore, we are recommending the building is safely demolished. However, no final decision has been made and we are keen to hear community views and new ideas for the Saltwater Café.

What new ideas would the department consider?

For the purposes of this consultation, we are seeking ideas that would deliver a community or economic return on the $300,000 investment required to make the building safe.

Why don't you build something new on the site?

There are currently two Aboriginal Land Claims over the Saltwater Café site. Any future uses of the site will be subject to the finalisation of these claims and in line with the needs and views of claimant Land Councils.

If there are no objections or new ideas, what will you do?

The department proposes to lodge a development application (DA) with Bega Valley Shire Council. The DA would seek approval for the demolition of the 59 Lamont Street building and remediation of the site.

What is happening at Apex Park?

Bega Valley Shire Council has received support from the NSW Government to design, develop and construct an all-inclusive playground in Bermagui. Following extensive consultation, council has chosen Apex Park as the preferred space. For more information, visit the council’s website.

How does this proposal impact on the Aboriginal Land Claims that include 59 Lamont Ave?

The department is committed to managing Crown land consistently with the Aboriginal Land Rights Act 1983. There are two Aboriginal Land Claims for areas that include the 59 Lamont St site, and we are in discussions with the NSWALC and Merrimans LALC to ensure traditional custodians’ needs and views are given primary consideration in determining the next steps for the proposed DA.

All community feedback is valued by the department. Your feedback will be considered in making a decision about this proposal.

The final decision will be published on this web page and on What’s happening in your area.

Back to top
Page link: https://www.industry.nsw.gov.au/lands/public/on-exhibition/proposed-demolition-of-former-Saltwater-Cafe,-Bermagui