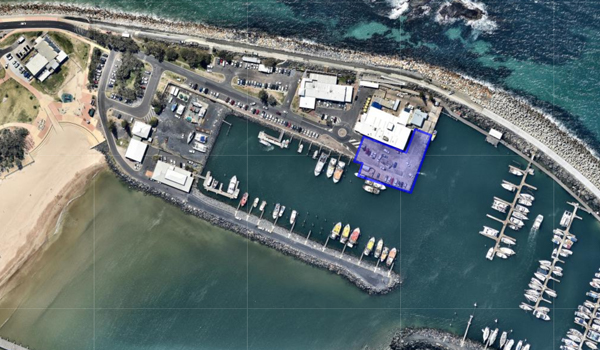 NSW Department of Industry is undertaking community consultation on a proposed new lease for Coffs Harbour Fishermen’s Co-operative (Co-op) to replace its current lease. The proposed lease will expand the lease footprint over a wider area of the waterfront and impose new restrictions on public access to the loading wharves and adjoining area.

There is also a proposed new lease for Coffs Harbour Marina, which does not have any impact on public access.

The Co-op lets commercial fishers land and market their fresh seafood products. Forklift trucks and other machinery is used to unload and resupply vessels and there are many truck movements to and from the area every day.

Consultation between SafeWork NSW, the Co-op and the NSW Department of Industry has identified this as a risk to public safety. Public access to the waterfront should be restricted to protect both the public and the commercial fishers who work on the wharves.

Community engagement activities for the proposed leases will include:

Why is this being considered?

Public safety is a priority and the Work Health and Safety Act (2011) requires every employer to provide a safe work place and observe safe work practices. Safe Work Australia has published a General Guide for Workplace Traffic Management -  which recommends a co-ordinated approach to risk management, including separating vehicles and pedestrians.

SafeWork NSW has notified the Coffs Harbour Fishermen’s Co-operative that the operation of forklifts and the movement of supply vehicles on and near the loading wharves is a hazard and that public access to the waterfront should be restricted to avoid the risk of serious injury.

Consultation between SafeWork NSW, the Co-op, Marina and the department has identified that the most logical management arrangement, given the traffic movements generated by Co-op and commercial fisher activities, is for the Co-op to control the working waterfront.

Under the new lease, the Co-op will have the authority to restrict public access during business hours (7 am–5 pm Monday to Friday) in the interests of public safety. The Co-op will build a fence and gate to control access once the new lease is granted.

How did the proposed Co-op lease come about?

Talks between the department, the Co-op and the adjoining Coffs Harbour International Marina have considered the hazards associated with the operations on the waterfront and options to reduce public risk. Because a single tenant is better able to control, mitigate and manage hazards along the waterfront, changes to the lease boundaries to give effect to this are being proposed.

When will the fence and gate be erected?

Following the public consultation period and subject to review of responses, the department expects to finalise a new lease with the Co-op in March 2019, which would authorise their occupation of the area. The Co-op intends to install the fence and gate as soon as possible after the lease is signed.

Will the public still be able to use the site?

The Co-op will make every effort to accommodate access by organised groups during business hours, for example for school sports activities (fishing) and to tour groups to observe the unloading of tuna and prawns in peak times.

What does the proposed new lease for International Marina include?

The proposed new lease for the International Marina includes wider access to the marina boardwalk and vessel-loading pontoon. This will have no impact on public access.

The boardwalk facility will still be open to the public, and will only be closed during storms or in other situations where public safety is a concern.

The Community Engagement Strategy was developed by the NSW Department of Industry to set an open and transparent framework for engaging the community about important decisions on Crown land. The strategy acknowledges that needs vary between communities, and that a range of engagement approaches may be required to ensure community views are fully understood before important decisions are made.

The department values all community feedback. Your feedback will be considered before any final decisions on the matter are made.

The outcome of the final decision will be published on What’s happening in your area.

Back to top
Page link: https://www.industry.nsw.gov.au/lands/public/on-exhibition/coffs-harbour-co-op