The NSW Government (the Department of Planning, Industry and Environment – Crown Lands and Transport for NSW) are working with the Gundagai community to acknowledge the historical significance of the Prince Alfred Bridge (timber road viaduct).

The timber road viaduct has not operated since 1984 and has not been required for transport since that time.

The timber road viaduct had deteriorated extensively in recent times and was in very poor condition, creating a public safety risk which would have only increased as it continued to deteriorate. The risk to public safety and property would also increase if the structure were to collapse during a flood event.

It is not feasible to restore the timber road viaduct given the large cost that would be involved, the requirement for large amounts of timber, future ownership and maintenance requirements, and a lack of public need for the disused viaduct.

The NSW Government started dismantling the timber road viaduct on Tuesday, 2 November 2021. The structure’s prompt removal was necessary to protect public safety due to ongoing deterioration and to prevent bats breeding in the timber structure, which occurs in December.

Work to remove the bridge is expected to be completed before the end of November.

Bat boxes have been installed adjacent to the bridge to provide additional roosting points as an adaptive measure while the bridge is removed. The NSW Government is working with Cootamundra-Gundagai Regional Council and the local community to achieve the best outcome for the community.

Any reusable material saved during the removal of the timber road viaduct is being stored for potential future use, including memorial options for the bridge.

Waste material from the timber road viaduct has been chipped and transported to the nearest waste facility .

Consultation with the community is an important part of this project. The NSW Government has sought the community’s ideas on how they would like the timber road viaduct celebrated now and for future generations. A survey seeking input from the public was open from 24 September to 31 October, 2021 and attracted a total of 139 submissions.

The outcomes of the consultation will inform how the timber road viaduct is memorialised. One of the benefits of this project is the opportunity to deliver a place for future generations to connect with and understand the historical significance of the viaduct.

A heritage consultant will now be engaged to assess the survey results and compile a report outlining potential heritage memorial options, feedback to honour the bridge’s memory.

Some heritage memorial ideas put forward through the community survey include:

When the Heritage consultant’s Report is finalised, advice will be provided on this website.

To find out more about the Gundagai Historic Bridges project, read the FAQs. 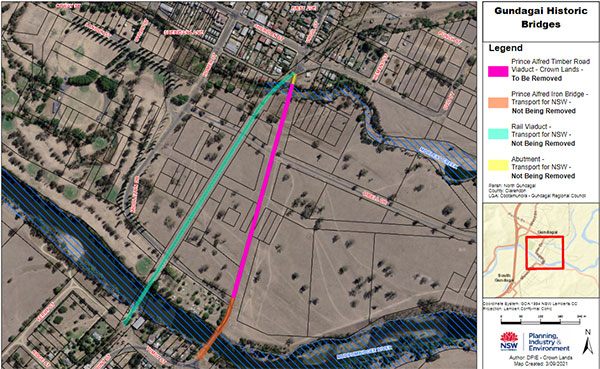 The timber road viaduct was completed in 1896. It was the first major bridge crossing over the Murrumbidgee River. The southern end of the bridge remains in service today (and will not be removed), while about 711 metres of approach spans to the north have been closed to traffic since 1984 have now been removed.

The timber road viaduct (highlighted above in pink) had deteriorated extensively and was in very poor condition, creating a significant risk to public safety and the environment. The NSW Government is progressing this project while monitoring the water levels of the Murrumbidgee River, as a flood event in the area could cause further damage to the bridge and infrastructure.

As part of the timber road viaduct’s removal, the NSW Government produced a Review of Environmental Factors (REF), to ensure the natural environmental attributes, including local waterways and animal populations, are not adversely impacted.

Safety is our priority

The Gundagai SES reported on 6 August 2021 that a section of the timber road viaduct had fallen at its southern end. Heavy rain in the area over winter increased the weight of the structure’s timber due to moisture retention, which is suspected to have caused this section to fail.

There was further risk of other sections of the timber road viaduct also failing, including the potential for significant collapse if there is a flood across the floodplain. Fencing and signage, encouraging members of the public to stay away from the site, were erected to protect the community.

The NSW Government is now considering the options provided by the community and will determine next steps in the coming months.

Media release: 125 year old Prince Alfred Bridge to be removed but not forgotten 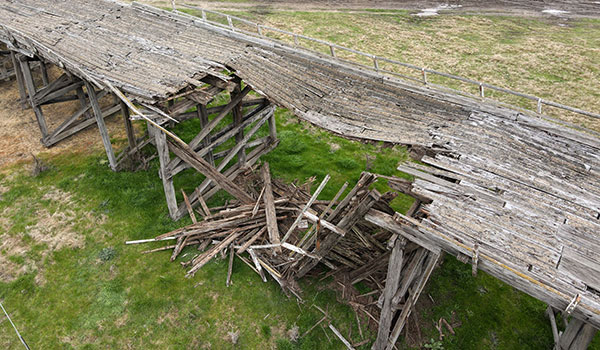 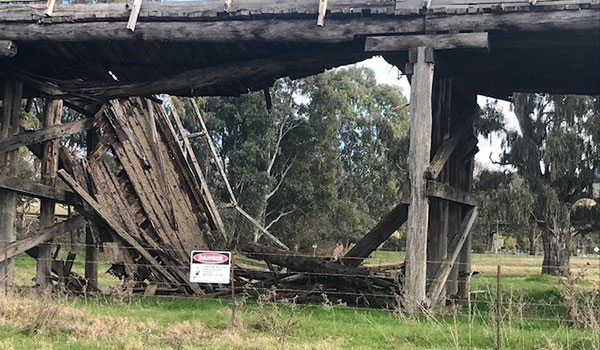 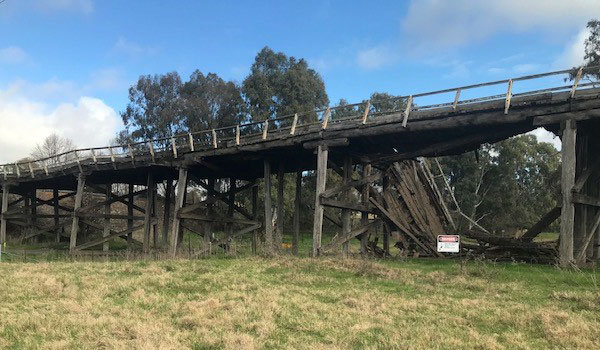 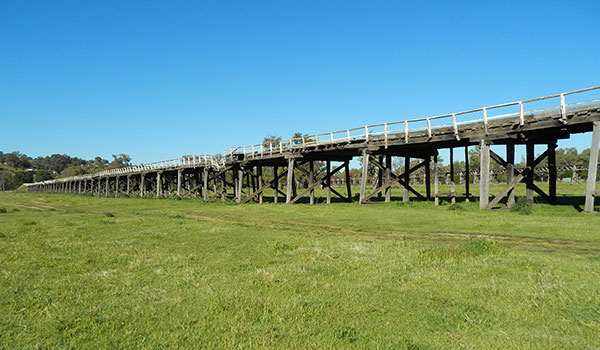 Back to top
Page link: https://www.industry.nsw.gov.au/lands/public/notifications/work-on-prince-alfred-bridge-at-gundagai