Fourteen of NSW’s leading aerospace and defence companies and organisations are being showcased to a global industry audience this week at the Australian International Airshow and Aerospace & Defence Exposition in Avalon.

More than 33,000 attendees are expected at the three day event from 26-28 February and there are also 44 conferences, seminars and symposia being held.

'The NSW Government is co-exhibiting with some brilliant defence companies, showcasing their abilities to thousands of visitors from domestic and global markets,' Director of Defence NSW Peter Scott said.

One of the NSW exhibitors is Albury-based Australian Aerospace Engineering (AAE) which specialises in helicopter maintenance, repair and overhaul on medium and light rotary aircraft.

They’ve been supporting the Australian aviation industry for 30 years, and are one of the most accredited SME’s in the rotary wing space. At Avalon, they are building relationships with defence primes to secure longer term contract work.

AAE Engineering Manager Adam Johnston said the show was a great opportunity to network in the commercial and defence aviation space and leverage their certifications to expand the business.

'Having purchased land at Albury airport we’re poised to offer regional NSW an even better Australian-owned aerospace capability with the bigger facility we’ll eventually have at that site.'

Williamtown company Bohemia Interactive Simulations (BISim) has developed Virtual Battlespace 3, the defence industry’s most widely used training simulation solution with customers including the Australian Department of Defence, the US Army and Marine Corps, the UK Ministry of Defence and NATO.

Participants ‘play’ as a character within the VBS3 simulation environment and perform virtual tasks such as operating weapons, driving vehicles and using radio communications.

'BISim is keen to expand its relationship with the Navy and Air Force and defence industry.

Varley is a finalist for the Avalon Innovation Awards this year with their ‘MudBucket’ avionics integration system which allows aircraft electronic equipment to be seamlessly incorporated into airframes without the need for additional software or interface changes.

'Over many years we’ve been associated with supporting RAAF airframes from Hawks to Hornets and Orions to F-35s,' Varley Group Managing Director Jeff Phillips said.

'We have a breadth of experience and a track record of supporting the RAAF and are really excited about our next phase of development— exporting world leading technology such as ‘MudBucket’ and the Enhanced Navigation Link System, which enables us to grow our business towards support of higher level avionics technology.'

Quickstep, based at Bankstown Airport, is well known in the defence industry community as the leading innovator of advanced composites technology, manufacturing processes and composites manufacturing solutions. They are the highest volume composites supplier for the F-35 and the C-130J Hercules in Australia.

'We see 2019-20 as a period of unprecedented growth in our defence manufacturing business, while continuing our strategy to bring our QURE ‘out of autoclave’ technology to the market.'

Back to top
Page link: https://www.industry.nsw.gov.au/defence-nsw/news/defence-news/nsw-aerospace-capabilities-showcased-at-avalon 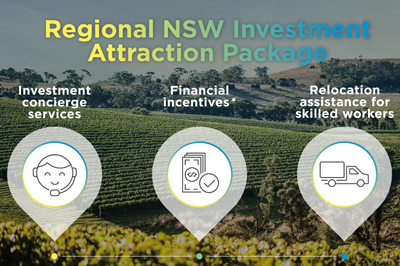 The NSW Government is making it easier for businesses to establish or expand in regional NSW.

Sign-up to our e-news service to receive updates from the department.