The best and most innovative of NSW defence and aerospace companies will take part at the upcoming Avalon Airshow in Victoria in February 2019, showcasing their capabilities to an international audience of customers, manufacturers and partners.

“That’s why the NSW Government is directly supporting 14 NSW companies to exhibit at Avalon, where their products will be seen by more than 650 companies, 150 delegations and 33,000 trade visitors expected to attend over the week.”

Co-exhibitors on the Defence NSW stand at Avalon 2019 range from large and diverse businesses such as Air Affairs Australia and Quickstep Holdings, to providers of specialised products and services such as Nupress Group and Australian Aerospace Engineering.

They will also include two industry networks, HunterNet and Shoalhaven Defence Industry Group, as well as the NSW Defence Innovation Network.

The NSW Government is committed to a national, collaborative approach to defence capability challenges—backed by a sustainable, technologically advanced and globally competitive defence industry base.

NSW-based defence industry is a critical partner in supporting the ADF, including its most recently acquired assets, the Royal Australian Air Force’s F-35 Joint Strike Fighters.

For example, Varley Group has been selected to not only deliver F-35 landing gear handling systems and canopy lifting assemblies but was recently selected by Lockheed Martin to help supply deployable F-35 ICT support facilities to the RAAF.

“The recent arrival of the first Australian-based F-35s at RAAF Williamtown highlights the capabilities of NSW defence and aerospace companies,” AIRMSHL Harvey said.

“NSW companies are not only intimately involved in the manufacture of every F-35 globally, they will also play a vital role in sustaining Australia’s future fighter fleet for decades to come.”

Support for defence industry at major national and international trade shows is a key component of the NSW Government Defence and Industry Strategy: Strong, Smart and Connected. In the last year, the NSW Government has directly assisted small and medium enterprises exhibit at numerous events, including Pacific 2017 in Sydney, Land Forces 2018, Defence Services Asia 2018 in Kuala Lumpur and Euronaval 2018 in Paris.

The NSW contingent of defence companies will be exhibiting on the Defence NSW stand (2G6) in the Aerospace Pavilion at the Avalon Airshow from 26 February – 1st March. A complete list of NSW companies co-exhibiting is attached below. 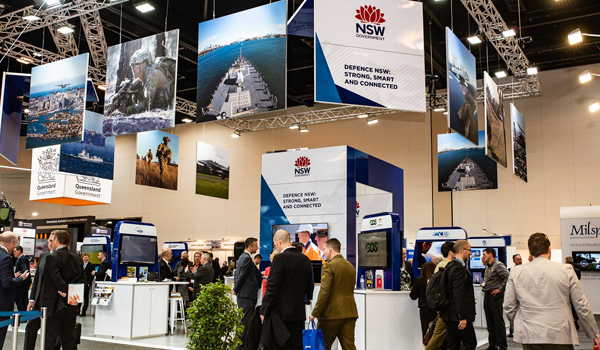 Back to top
Page link: https://www.industry.nsw.gov.au/defence-nsw/news/defence-news/media-releases/nsw-defence-industry-takes-wing-at-avalon